Showing posts from August, 2020
Show All

Who's Benefiting from the State Revitalisation Program? 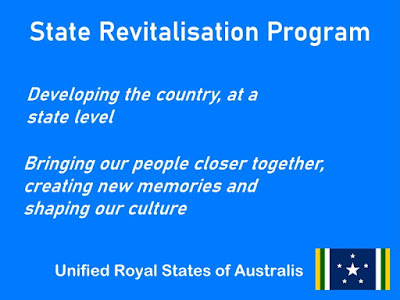 The State Revitalisation Program has recently been one of the primary undertakings of the Australissian Government, with the goal of improving the nation on the state level, however some have complained that their state is not benefiting from the program.  In an official Government statement, when questioned about the SRB, the Grand Duke of Australis, Daniel Roscoe, stated;  "All states will eventually benefit from the SRB. Currently, Amicitia and Integritas are the main priority for the SRB. Felicitatem and Beatitudinem will be the main focus after these two are complete. We will also eventually develop the territories."
1 comment
Read more

August 24, 2020
The long awaited Australissian Citizen Identification System, known as ACIDS, has been launched. Marcus Oosthuizen, the Minister for Technology of Australis, has led the development of ACIDS for about a month. The release of ACIDS will partially automate the citizen registration system. Prior to its release, a person would apply to become a citizen, and upon being accepted, very basic information would be typed into a document. This process was complicated and made it easy for information to go missing. ACIDS will prompt the government member to input more detailed information and store it on the cloud to prevent file corruption or accidental deletion. Prior to the commencement of ACIDS development, the Grand Duke of Australis and Chancellor jointly worked on what was called CID at the time, however by the time ACIDS began development,  ACIDS is set to remain private, closed source software. The program will be distributed to government members in key positions relating to citizenship.
Post a comment
Read more

The First Recipients of the Order of Australis

August 02, 2020
Announced a few days ago, two people were awarded the Order of Australis, a civil service award awarded for considerable service to the government and nation leading to the growth of Australis as a whole. The two recipients of the award were Jared Barker, Chancellor of Australis, and Patrick Kenny, Minister for Foreign Affairs of the Kingdom of Australand. The decision to award a non-citizen, Patrick Kenny, with the prestigious award, was made due to Kenny's considerable work in helping Australis grow, supporting the Meritocracy Implementation Plan and helping to establish the Perth Accord.
Post a comment
Read more

August 02, 2020
Recently, on the 30th of July, 2020, the Unified Royal States of Australis began the transition to a meritocracy. The decision came after weeks of deliberation and the apparent threat of a splinter cell rising, intending to abuse to democratic system to gain power. The Grand Duke, Daniel Roscoe, believes that this is the best way forward for Australis. "To be honest, Australis has needed meritocracy for a while, and I'm glad we've finally begun to implement it. We can now appoint members of government who will actually have an active role in the community." - Daniel Roscoe, August 2, 2020 The Meritocratic Implementation Process, known as MIP, will make up much of the job of the Australissian government throughout August. It will consist of appointing new members meritocratically on August 18, implementing a purpose built currency system and also strengthening the commitment to Australis put in by its citizens.
Post a comment
Read more
More posts